YOU HAVE (0) ITEM(S) IN YOUR CART. CHECKOUT NOW
Operation Christmas Child
CENTRAL ASIA 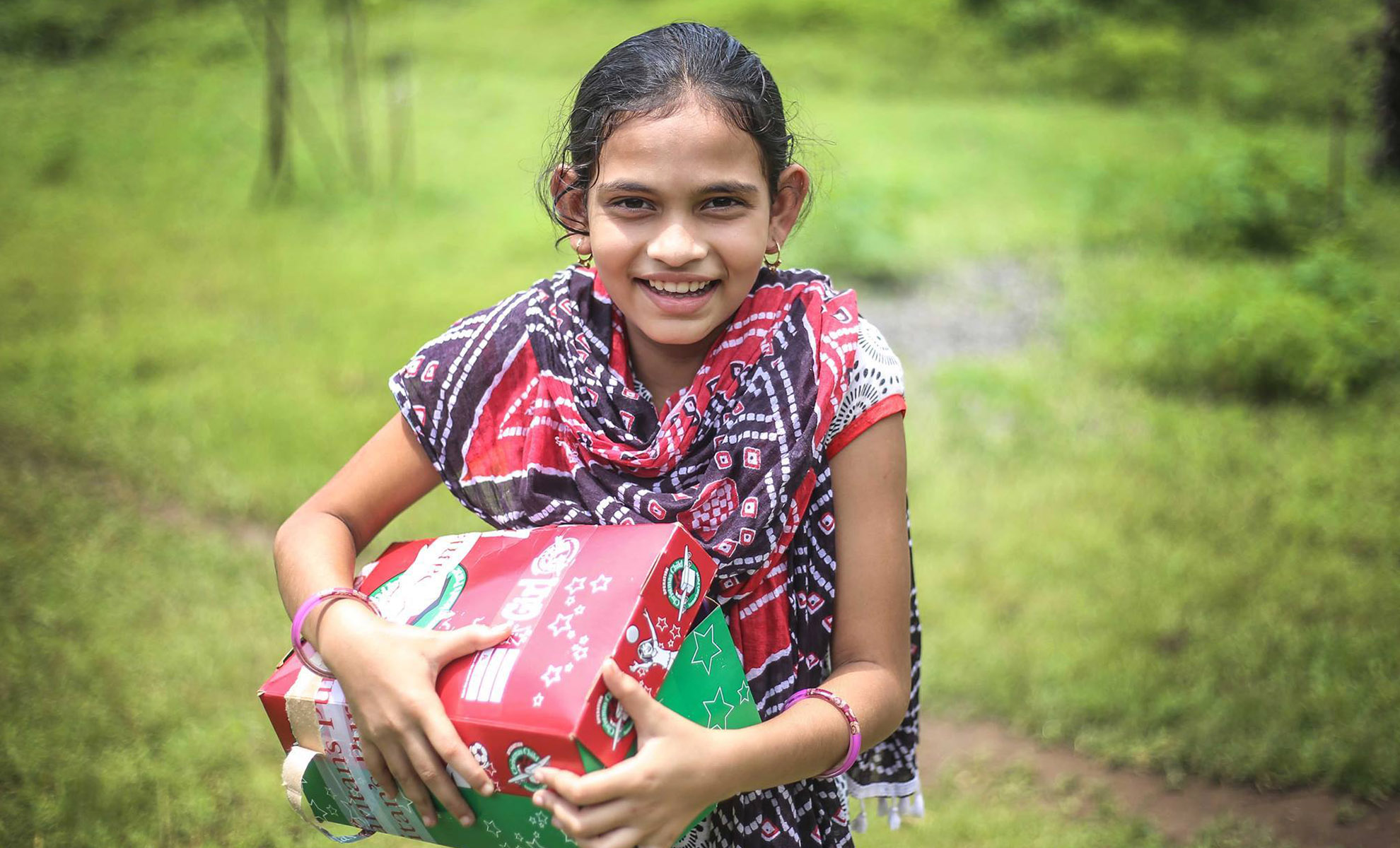 Thank you for bringing Good News and Great Joy to a child living in Central Asia!

Your shoebox gift was one of 51,534 that has been delivered to children in Central Asia. We thank God for the thousands of children that have received shoeboxes here since Operation Christmas Child began distributions.

Your shoebox gift is also helping build goodwill between peoples of different faiths. It was part of a distribution that local church groups made to children of all religious backgrounds in their community. However while political and religious sensitivities continue within Central Asia and for the safety of our ministry partners living in restricted areas, they have asked us not to disclose details about the specific country your shoebox was sent to.

One of our international representatives described the power of these simple shoebox gifts:

“In the very restricted environments, we can’t have local believers out being vocal about their faith. A shoebox becomes a key to a closed door. I desire to be involved in the work of love. In the remote areas where people have nothing, where people are dirt poor, this box gives them hope. This is love. True love. This opens the eyes of the people. Jesus said, ‘I am the light of the world. He who follows me will not walk in darkness but have the light that leads to life (John 8:12).’ Through Operation Christmas Child, God has given us the opportunity to penetrate the darkest places in this world.”

Some of our favourite photos from around the world: 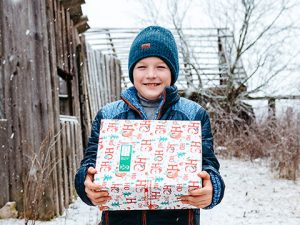 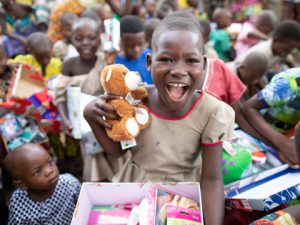 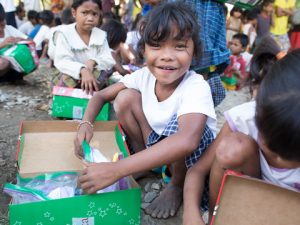 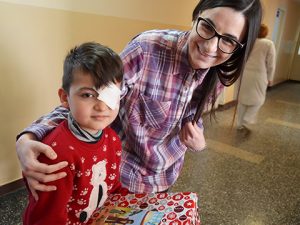 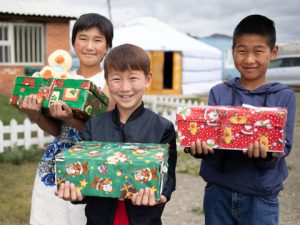 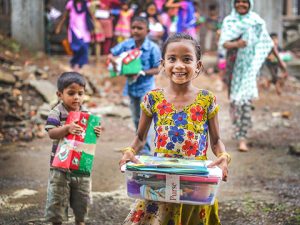 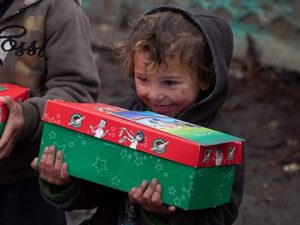 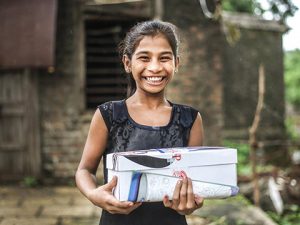 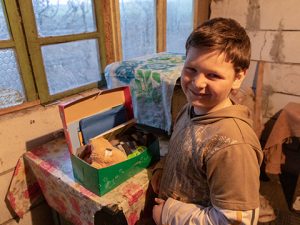 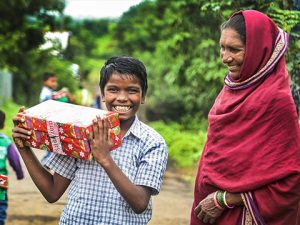 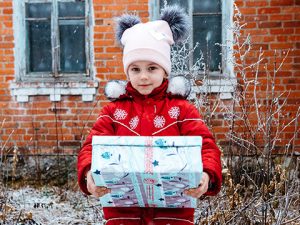 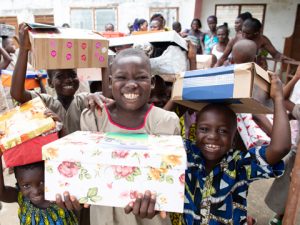 ONE OF OUR PARTNERS SAID:

“Both children and adults felt God’s love and were filled with joy. They were thankful and happy. Distribution of the gift boxes helped our church to build stronger relationships with the community.”

Country names have been removed for security reasons

“I want to tell you a story about a country that always has difficulties. We have been getting shoeboxes for over 15 years. Many of the kids who received shoeboxes are now leaders in many farms. They are the ones who are multiplying and reaching many youngsters and many people.

There was a pastor in a city who got boxes from the team and he distributed in one of the villages. The whole village received the boxes and happily accepted the message.  Five years later, there was a change taking place in the village as kids were sharing the gospel with their parents, peers and with their families. The village now has 23 families that have accepted Christ! They are meeting every week so the pastor is ready to build a small church there so they can have place to meet. Initially they met underground but slowly, steadily they started meeting in the family houses. Now they have a piece of land and they are building a church!

A small gift box impacted a few kids and that has impacted 23 families. This village has become a Christian village now! Please pray for the people working on the front line. They travel from place to place and they reach people with the gospel. Sometimes we can’t see the results immediately, but you can see the results after 4 – 5 years. That’s exactly what happened in this small village.”

A ministry partner shared a moving story of a boy who was growing up in a home with domestic violence. He shared how the boy was frequently beaten by his alcoholic father and often made to go without food. His mother also suffered abuse and felt helpless to intervene. Unable to even play with his friends, the boy became discouraged and angry. He withdrew and spent hours sitting in a dark room, not wanting to see anyone.

One day a pastor and his wife visited their village and distributed shoebox gifts to all the village children. The boy was reluctant to go to the event but his mother had given his name and encouraged him to go.  As he collected his shoebox gift, the Pastor said, “God loves you.”  The boy shared that this is the first time he heard that someone loved him. The pastor explained that the people who sent the gifts also loved him and wanted to share God’s love with him by sending him this gift. The joy that this knowledge and practical expression of love brought the boy changed his life forever. He now knew that even though his father did not love him, God did.

He began cycling 7km to attend church and gradually learned more. When he heard how Jesus loved him so much that He died to save him, he decided to follow Jesus and his life was transformed. His home life was still difficult, but he had a sense of joy that no one could take away from him. His mother and sister saw such a change in him that they too became curious, wondering what had given him such happiness. He continued to attend church and loved learning as much as he could about the Bible.

Several years later, he is a Sunday school teacher and shares what he has learned with others, including his mother and sister who now come to church with him.

He said, “I’m very thankful to Operation Christmas Child. I really do not know who sent me that box but that gift brought me thus far.  Since Jesus gave His life to me I want to introduce this loving God to all children in my village and other places. Every second of my life I want to serve Him”.

THE LASTING IMPACT OF A SHOEBOX GIFT

An OCC team member was recently meeting with a Ministry Partners in a restricted country. After discussing how the season had gone, one pastor, told this story: Recently he was charged with plagiarizing some documents at his photography business. It wasn’t true, but as the pastor of the only church in an area that is predominately another religion he often runs into such situations. When he was brought in, the head investigator at the police department found out that he was believer and was involved in OCC. The pastor is a Ministry Partner, they distribute gift boxes to children every year. The investigator told the pastor that over 20 years ago, when the country was recovering from a civil war, he had absolutely nothing. He was invited to a distribution event and received a gift box and it forever impacted him that people would bless him with such love. This is forever seared in his heart. He warned the pastor that he’d been ordered to confiscate some of his property, but told him to go find some old broken office equipment and ‘hand it over’ and to keep his property. “I won’t touch your stuff,” he said. “That gift impacted my life, and you’re helping others.” Perhaps one day this investigator will become a believer, but for now, God is using him as a Person of Peace to help one of our Ministry Partners in a difficult area. All thanks to a simple gift.

A MESSAGE OF THANKS FROM CHILDREN WHO RECEIVED SHOEBOX GIFTS.

These children live in Moldova but represent children everywhere, including Central Asia who were given a box from the UK.

THANK YOU for sharing Good News and Great Joy with children around the world!