For the past eight months, Samaritan’s Purse has been helping the Bahamas recover from the devastating aftermath of Hurricane Dorian.

More than 20 feet of seawater flooded the home of Bishop Bert Livingstone Williams, Jr. in September 2019. His son and daughter-in-law ran to the second floor of the house to escape the influx of water, only to be sucked out of the upstairs window into the storm surge. His daughter-in-law can’t swim, so his son thought his wife was dead—until a short time later, a neighbour helped reunite the distraught couple on a hill about 300 feet away from the home.

The effects of Hurricane Dorian are intensely personal for people of the Bahamas. Bishop Bert’s home was a total loss as were many like his in the Abaco Islands where Samaritan’s Purse has been working since shortly after the storm. Complete restoration of power to the islands is expected this month, but in some areas, freshwater is still scarce.

“It was tough,” said Bishop Bert six months after the storm. “I thought God was teaching me a lesson that things can come and they can go as quick as they come. You cannot base your life on material things, but on knowing God—He’s always there.”

Partnering with Churches to Provide Shelter and Water

Bishop Bert is one of many pastors Samaritan’s Purse is working with to provide water, shelter, and relief supplies to devastated communities. His church, Bethany Gospel Chapel of Murphy Town, a division of Marsh Harbour, Abaco Island, is providing lodging for families in need as well as serving as a distribution point for much needed items such as cleaning supplies, cookware, mattresses, and bedding. 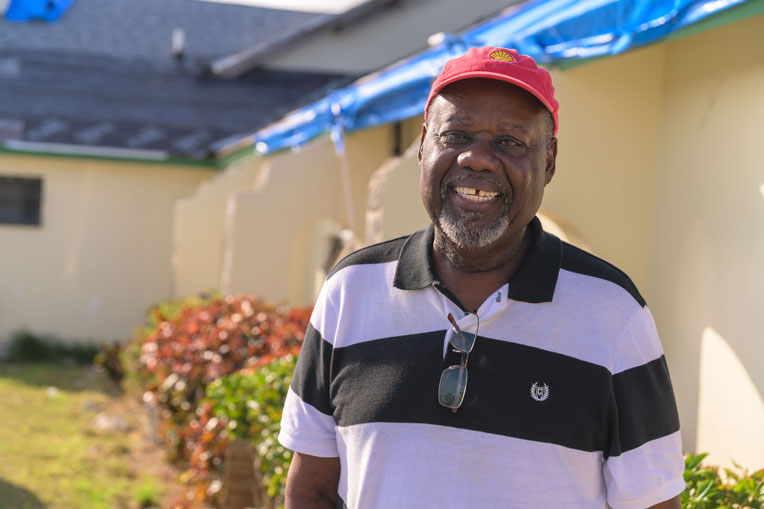 Just outside the church building sits two 1,000-liter tanks that Samaritan’s Purse fills with water weekly. More than 21,000 litres of water are delivered to eight different points like this one throughout greater Abaco each week, while nearly 80,000 liters a week are distributed to nine different churches around Freeport, Grand Bahama Island. At all these water points, we are preventing against the spread of COVID-19 through newly installed hand-washing stations, the practice of disinfecting taps, and the distribution of preventative materials. In addition, we are providing water tanks, a pump, and a generator to four schools to allow them to continue serving students.

“It means the world to me. When I got here it was the only water on the island,” said Eulamae Gomez of the water supply at Bethany Gospel Chapel.

As community members come to fill their jugs, these water points at churches across the northern Bahamas are bringing people from the community into contact with believers in Jesus Christ in ways they otherwise might not have.

In addition, Samaritan’s Purse is working through churches and pastors to repair damaged homes.

When Pastor Peter Watson of Freeport first met Earl Moss, he was walking through his neighbourhood all alone, looking destitute.

Earl and his wife Lisa as well as their daughter, son, and niece had waited out Hurricane Dorian in their home until the roof caved in. They then fled to a van in their yard that the couple drives as a taxi. When a large piece of debris hit it, they relocated to their second van until the glass in that one shattered. After that scare, they went to their neighbor’s home until the storm passed completely. 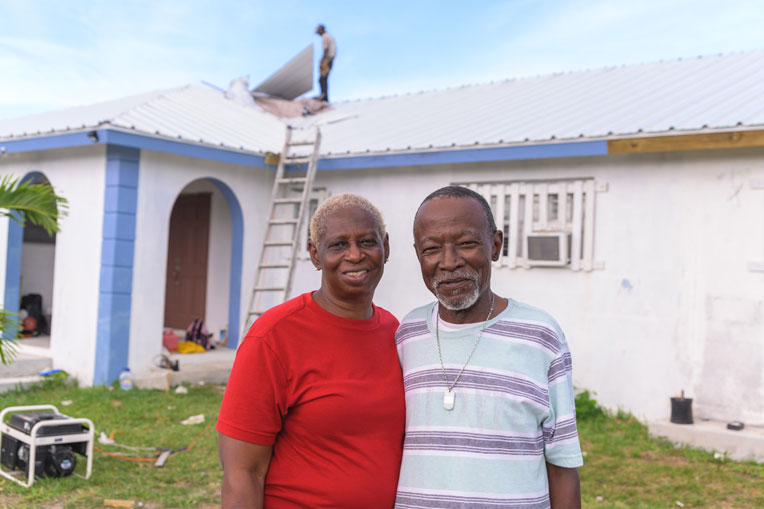 Lisa and Earl Moss rejoice that Samaritan’s Purse worked through local contractors to give them a new metal roof.

“I didn’t know if the house was still standing,” Lisa said, but they soon learned that while everything was a “total mess” they still had walls.

“I was thanking God for life,” Lisa said. She knew that if her family had stayed in their home, they may not have made it out alive.

“Samaritan’s Purse put a tarp on the roof and gutted the rooms that had mold,” she added. That night 13 of her family members slept on the floor in one room and Lisa said that it “felt like home again.” Their family all came to Lisa and Earl’s house because they were the only ones who had any semblance of a house left.

As materials and labor became available, Samaritan’s Purse worked through Pastor Peter to hire local contractors who put a metal roof on the Moss home.

“Samaritan’s Purse coming here has been a blessing to me and my family,” Lisa said.

In other locations in the northern Bahamas such as Elbow Cay of the Abaco Islands, Samaritan’s Purse North American Ministries is coordinating volunteers to remove debris and repair homes. 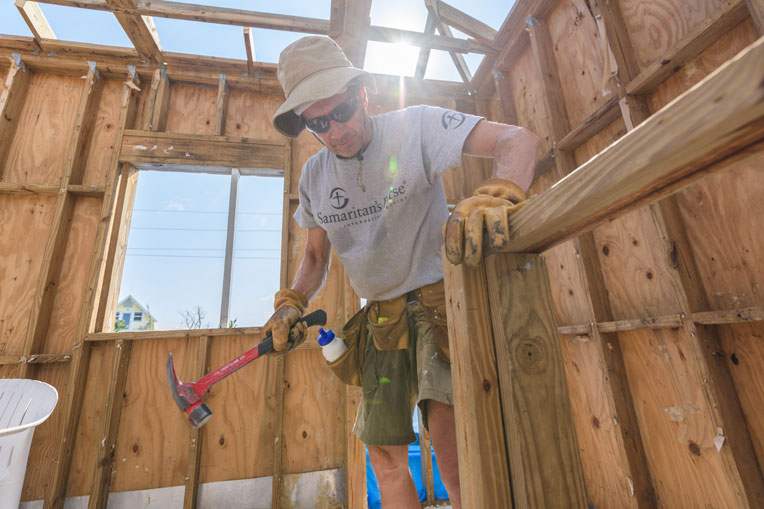 Vernon Malone is a local business owner whose family has lived on the island for seven generations. His ancestors moved to Elbow Cay from South Carolina in 1785 as United Empire Loyalists who pledged their allegiance to the king of England.

He described the devastation of Hurricane Dorian on their village of Hope Town: “Before it was a bustling little town with thousands of tourists every year, but after Dorian—there’s not enough words in the English dictionary to describe the destruction.”

Vernon’s home was lost in the storm as was the homes of many of his family members. Piles of debris five feet high lined the Queen’s Highway, the main thoroughfare in town.

Since arriving in November, more than 185 Samaritan’s Purse volunteers serving in one- to two-week stints each have repaired 96 homes on Elbow Cay and, together with our international projects teams, cleared more than 27,000 cubic yards of debris from the island.

‘Christ Came for Us, So We Come to Them’

Volunteers gutted the home of Ira Key and his elderly parents, pulling out all the waterlogged walls and insulation. They also sprayed to prevent the spread of mould and shingled his roof.

Some of these volunteers later presented the family with a Bible signed by all who had worked on their home. “It meant a lot to me—it was a big burden off of my shoulders. I’m thankful and grateful from the bottom of my heart,” Ira said. 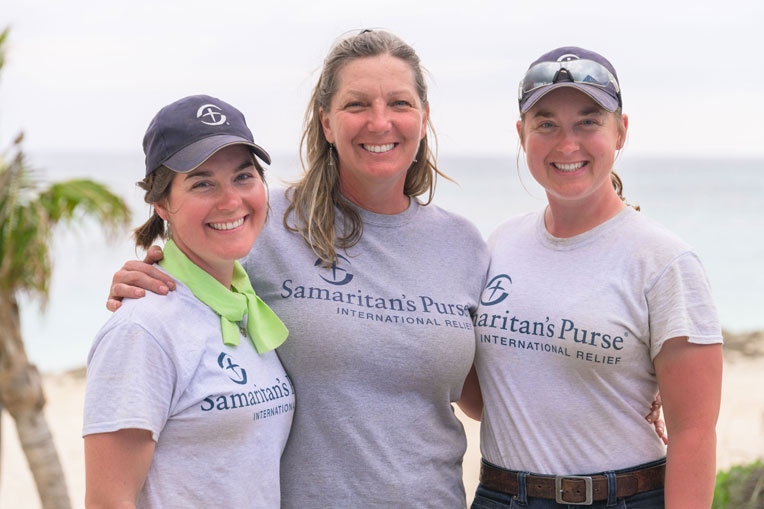 Volunteer Dave Yurek of Indianapolis, Indiana, gave of his time to repair homes like Ira’s.

“I really like the focus of talking to the homeowners and presenting the Gospel to them. We had a need and Christ came for us, so we come to them,” he said.

Previous to his service on Elbow Cay, Dave volunteered on Man-O-War Cay where he was among 150 Samaritan’s Purse volunteers who removed more than 20,000 cubic yards of debris, tarped 129 roofs, performed 36 mud-outs, and demolished 39 homes.

Tyra Esterly of Shelton, Washington, also served on both Elbow and Man-O-War Cays with Samaritan’s Purse together with her sister Veronica and mother Kathleen. When asked why she volunteers her time in this way, she said, “It brings to mind the verse that he who has been forgiven much will love much (Luke 7:47). When you experience that newness that comes with Christ you have so much joy. It’s almost a conditioned response—this is an opportunity I can love on them.”

Tyra encourages others to consider volunteering with Samaritan’s Purse.

“There’s a world of possibilities of people that need love. Regardless of where the location or the skill set, [Christ] just needs willing hearts. Come be His hands and feet.”