YOU HAVE (0) ITEM(S) IN YOUR CART. CHECKOUT NOW
Water, Sanitation, and Hygiene

‘Water Is Gold in the Bahamas’

When Hurricane Dorian tore through Freeport, Grand Bahama, in September 2019, a massive storm surge swept seawater inland about two miles and into many of the wells on the island. 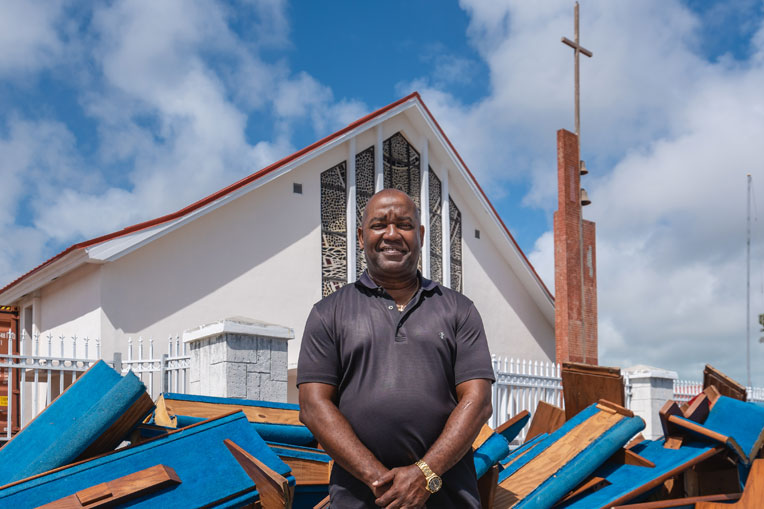 To help provide relief, Samaritan’s Purse began hauling fresh water to nine different locations around Freeport, one of which is in the First Baptist parking lot.

Since mid-October, we have distributed 135,700 gallons of water to the First Baptist site. Originally, the tank held 400 gallons and was gone within two hours of being filled. Even after being replaced with a 2,000-gallon tank, it still needs to be refilled once a day because so many people—from the immediate community and others from many miles away—come to fill their water jugs.

“The potable water systems around the country are a lifesaver. As far as drinking water, this is it,” said Pastor Keith. “The average person in the community doesn’t have funds to purchase it. Unemployment in this city is close to 60 percent.”

But the water distribution point at First Baptist is doing much more than just quenching physical thirst. People are coming to get water who would never before have thought of coming to a church. 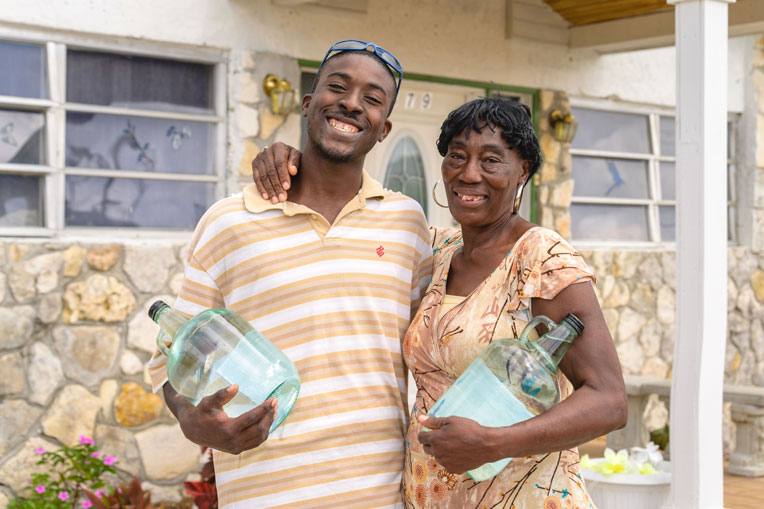 Kesneil and Villa Mae appreciate getting water from Samaritan’s Purse

“It reminds me of Jesus with the woman at the well,” said Pastor Keith. “The water facilitates another conversation—a conversation about Christ.”

Not far from the church tank, padded pews are heaped in a pile along the road. Eighteen inches of seawater flooded the First Baptist sanctuary during the storm and ruined the interior. It’s just one of several area churches that were damaged by Dorian. But that isn’t stopping congregants from reaching out to their neighbours.

Villa Mae and her grandson Kesneil, who attend a local Presbyterian church, regularly come to get water from the tank at First Baptist.

But they don’t just come for themselves. They also collect water for their elderly neighbour Carmel Brown who has been blind for the past 21 years. 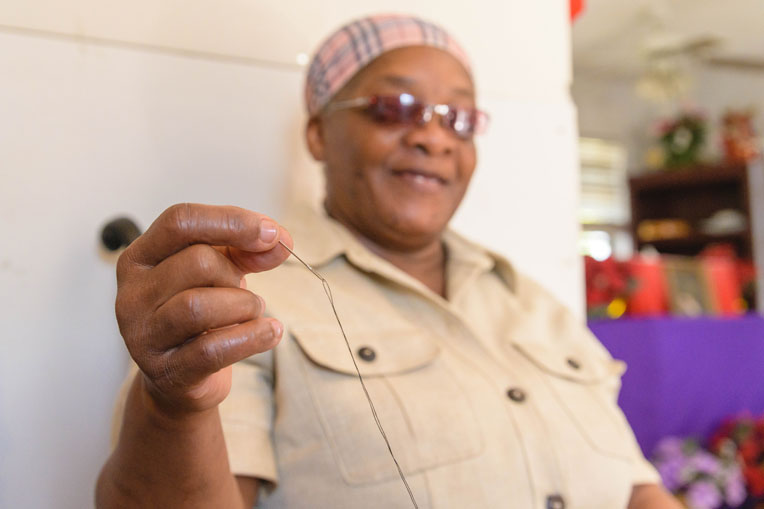 Carmel Brown can still thread a needle even though she is blind.

“You need water for everything,” Carmel said. “I need it for cooking, bathing, cleaning, drinking. It’s been a blessing!”

Although Carmel isn’t able to travel to the church water point, she remains fiercely independent. She relies on God giving her vision to do the tasks before her each day.

For the past 40 years, Carmel has worked as a seamstress. She envisions her projects and completes them as though she has her physical sight. She’s a whiz at threading a needle. She wraps the string around her thumb and uses a second needle to push it through the eye. Sadly, Carmel’s sewing machine was badly damaged in the hurricane, putting an end—at least temporarily—to her seamstress work.

Villa Mae and Kesneil are delighted to love their neighbor by bringing Carmel water. Kesneil’s name means “strength,” and he has graciously exhibited that quality to others since God spared his life from a near-drowning accident in 2000. 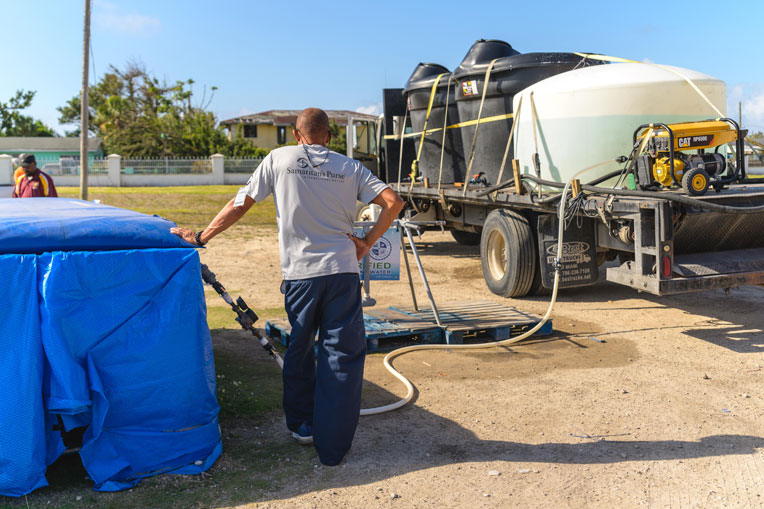 Samaritan’s Purse fills the 2,000-gallon tank outside of First Baptist Church with freshwater once a day.

After five months without any power or form of communication since Hurricane Dorian, the pair are seeing God build their resilience.

“It made me even stronger to go through something like that and still be here,” Villa Mae said. “I have life and where there is life there is hope.”

And she continues to be grateful for the water. “Right now, water is gold in the Bahamas,” she said. “[Samaritan’s Purse and its donors] are like angels that God sends to help people in time of need.”

Pastor Keith is also thankful for Samaritan’s Purse and how God is providing for his community.

“Thank you from the bottom of my heart for your care, your concern, your love, and your efficiency in getting here at the time when we really needed it. I thank God for it!” 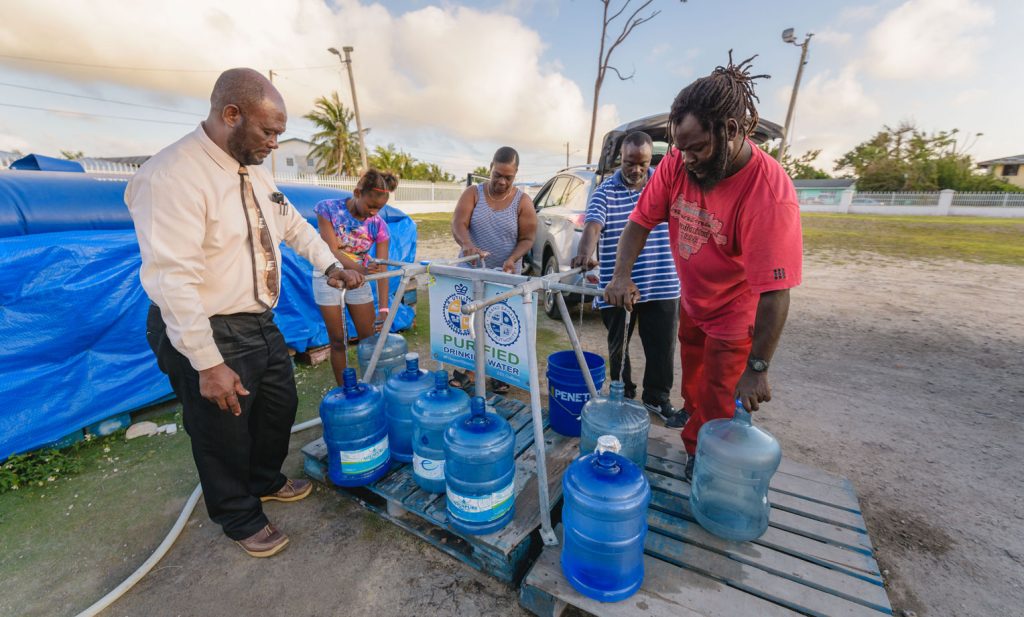