YOU HAVE (0) ITEM(S) IN YOUR CART. CHECKOUT NOW
Gift Catalogue

They No Longer Call Her Cursed

Through the Samaritan’s Purse Cleft Lip/Palate Programme, we are at Liberia’s ELWA hospital providing live-changing surgery in Jesus’ Name. 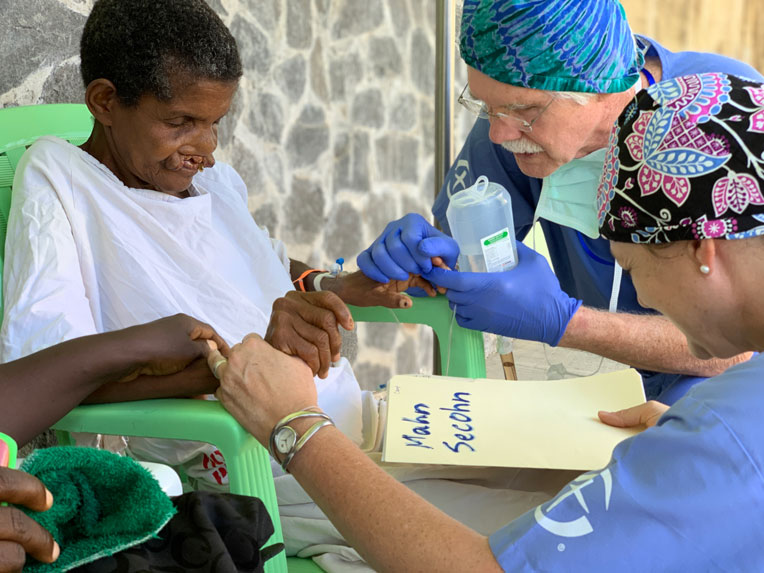 The surgical team prays over Secoh Mahn before she goes into the operating room.

The work that we are able to do here in Liberia is not without its challenges. Daily we are faced with spiritual oppression, difficult and dangerous roads, and overwhelming need. But God continues to provide moments and miracles that keep us going each day as we work to see lives transformed through the Gospel, a strengthened church through partnership and improved communities.

One of our favourite moments of the year is when the cleft lip and palate surgical team comes to conduct surgeries at ELWA Hospital in Monrovia, Liberia. Recently I spent the day in ELWA’s operating room watching the two skillful surgeons and their operating teams meticulously provide these life-changing surgeries—correcting palates and pulling lips together like an elegant jigsaw puzzle.

I had the opportunity to meet patient Secoh Mahn, who had lived for 64 years with a severe cleft lip. Incredibly small in body, she smiled with two teeth protruding from either side of her mouth. She showed no sense of nervousness for her upcoming surgery. Bethany Denshum, the CLP (Cleft Lip Palate) Programme Manager, asked Secoh, “Are you nervous?” 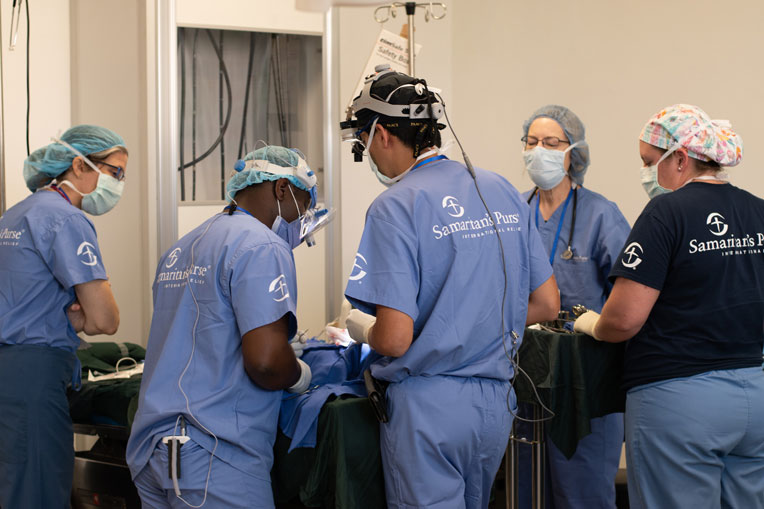 Cleft lip/palate surgeries take a couple of hours to complete but can dramatically change a patient’s entire life.

Her caregiver translated her response, “She is excited! She wants to look just like you.” I quickly captured a picture of Secoh. Soon she would be whisked away into the operating room, where, in just two short hours, the only way she’d ever seen herself would change forever.

As they do with each patient before surgery, the team held Secoh’s hands and prayed over her.

But there was something more than Secoh’s cleft lip that particularly drew me to her. It was this sweet, calming presence. Her eyes spoke nothing but love. On her way to the operating room, she slowed down to gently shake the hands of everyone she passed.

I reflected on what her life had to have been like in Liberia with a facial deformity. Cleft lip is not a well-known condition, especially in the rural areas of Liberia. Often times if babies are born with any type of deformity, including cleft lip, they are assumed to be cursed.

Sometimes they’re accused of being witches. More often than not these children are literally thrown into the jungle to die.

In just two short hours, the only way she’d ever seen herself would change forever. 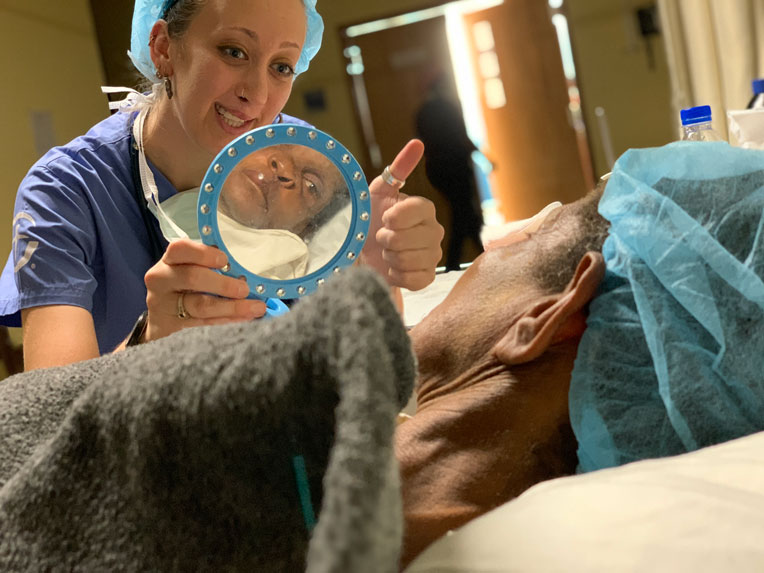 Secoh Mahn lived with a severe cleft lip for more than six decades. That changed this year.

I later learned that by God’s grace it was Secoh’s father who kept her alive and refused to believe what the rest of the community was saying.

Her mother believed she was cursed and didn’t make much effort to support Secoh. Thank God for her father. He did all he could for his daughter, even as the rest of the community reminded him “she is a witch, she deserves to die.”

Alone But Not Forgotten

Life never got any easier for Secoh. But there was one man that saw past her lip and wanted to marry her. They had three children together, but her husband and two older children died of starvation in the 1990 civil crisis, when Secoh was three months pregnant with her third child. 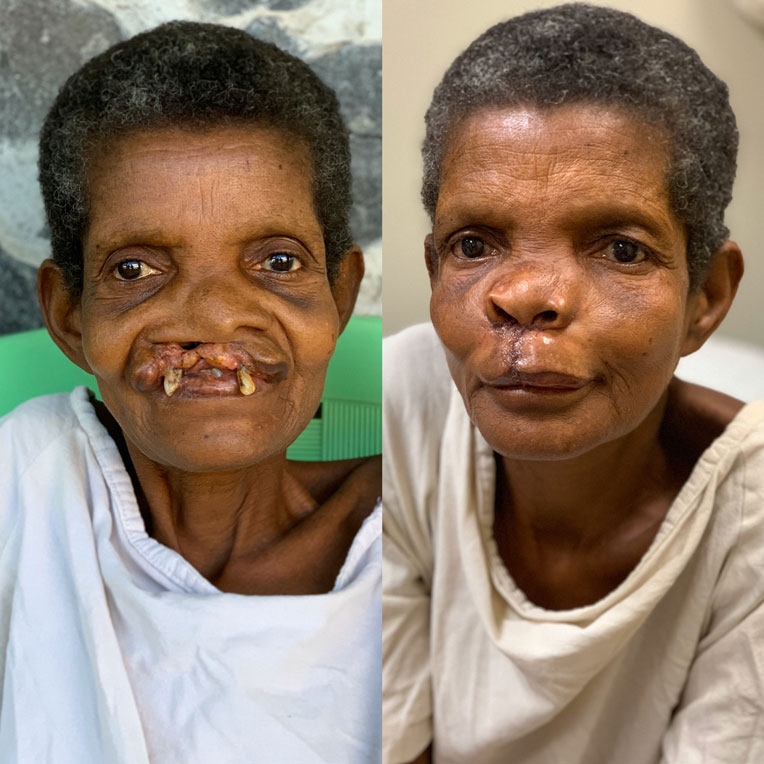 Before and after Secoh’s cleft lip surgery at ELWA.

She was widowed, grieving the loss of two children, and ostracised by her community because of her cleft lip. Yet she persevered.

She found Jesus and became a member of the United Inland Church of Liberia in her village of Garnplay, Nimba County. Even in church the isolation continued. On whichever bench she sat on for the service, she sat alone.

Completely on her own, with no one to support her, all the community members would do is pass by and look at her. No one would provide food. No one was reaching out. Except for Jamima.

Jamima’s parents were very close friends with Secoh’s parents many years back. Although Jamima lives in a different village, she saw Secoh’s condition and decided to take her into her home.

Jamima wasn’t prepared for her neighbours to now stop talking to her as well. “I would tell them that she is a human being just like you. She bleeds, just like you. She eats, just like you.” Still, no one listened.
Thanks to the nationwide mobilisation process each year, Jamima knew of the cleft lip and palate programme conducted by Samaritan’s Purse. She persistently phoned Yassah Dorwulo, Samaritan’s Purse Liberia CLP coordinator, reminding her that Secoh needs to be on the list. And she was.

On Monday morning, the Samaritan’s Purse helicopter landed in Secoh’s village, where almost the entire community came out to see Secoh leave on the helicopter. “No one believes that her lip can be corrected. They all came to see her go.”

Making Beauty Out of Hardship

Indeed, life has not been easy for Secoh. And as the surgery went on and her lip began to come together, I began to cry. Thankfully my surgical mask was hiding the majority of my tears, but I was overwhelmed with several things. 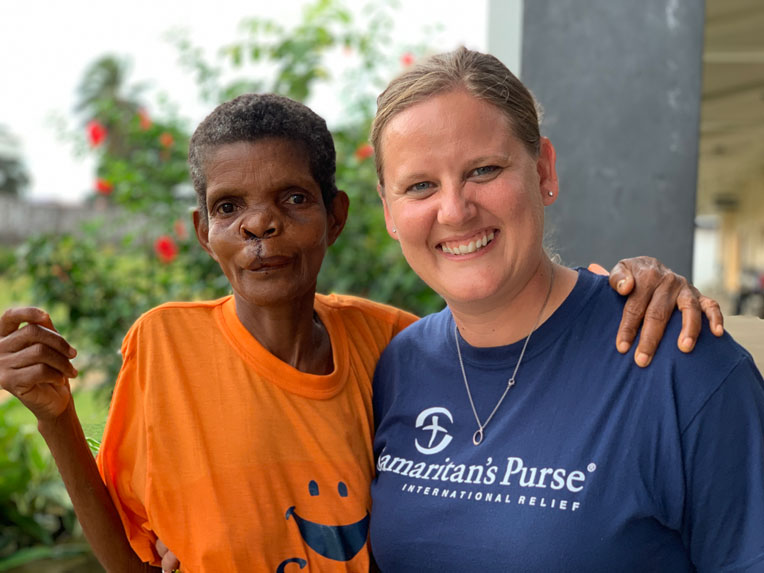 First, what this physical transformation would mean for Secoh after 64 hard years of being an outcast. Secondly, would her community now accept her? And lastly, as I watched the surgeon beautifully put the final stitches in place, I could only think of how the Bible states that God is the great physician. Just like Dr. Wade was taking Secoh’s mess of a lip and making something beautiful, oh how God does that with our lives as well.

The operating room was buzzing at the result. It was breathtakingly beautiful, this new lip of hers. She was rolled into recovery and I eagerly waited for her to wake from her anesthetic so I could witness her first look in the mirror.

When that moment came, it was worth more than money itself. Fresh out of anesthetic, her eyes focused on the mirror and her head shot up from the pillow to allow herself to see even better, as if she herself could not believe it! And all the while, this beautiful humming sound, a sound of real satisfaction came from her closed mouth. She was indeed very happy with this new look.

Jamima could not stop smiling from ear to ear.

A couple of days later, Secoh and Jamima boarded the Samaritan’s Purse helicopter to return back to their home. The first thing Secoh did was pull out her mirror and admire her new look. “She has not been sleeping much at night,” Jamima shared, “She just stares in the mirror admiring herself.” I can only imagine after 64 years what a change it is for her to comprehend.

A Life of Isolation Is Over

As the chopper landed in her community, swarms of people approached to see for themselves the transformation of Secoh. As soon as the door opened up, the crowd began cheering. Hundreds of people pushing and straining to see with their own eyes this “miracle.” 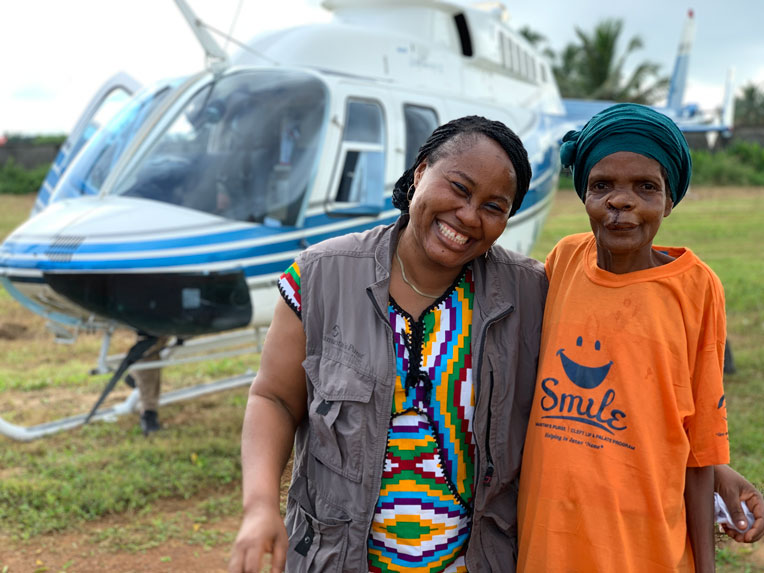 Friends join Secoh as she returns to her village after surgery.

Within days, Secoh had gone from being ostracised and ignored her whole entire life, to being celebrated by the entire community, grasping to shake her hand, handing her money, giving her hugs. An instant celebrity. And Secoh took it all in stride. As we reached the community centre where the crowd settled, we made sure to sit next to Secoh on the wooden bench, giving a clear message to the community that she is not cursed, but she is our friend.

A community elder came forward to thank Samaritan’s Purse for the work and assistance done with Secoh. We were able to share with him and the crowd, that we know the meaning of Secoh means “cursed,” but that is no longer her name. She is not cursed, but she is our sister, our mother and our friend. “From today forward, she will no longer be called Secoh, but her new name—Grace.” The crowd cheered with applause.

As this announcement was being made, women and children began to join Grace on the bench where she sat. Thanks to the cleft lip team, a life of isolation is over.

Note: Grace was just one of 35 patients treated this past October in Liberia. We praise God for what He did! 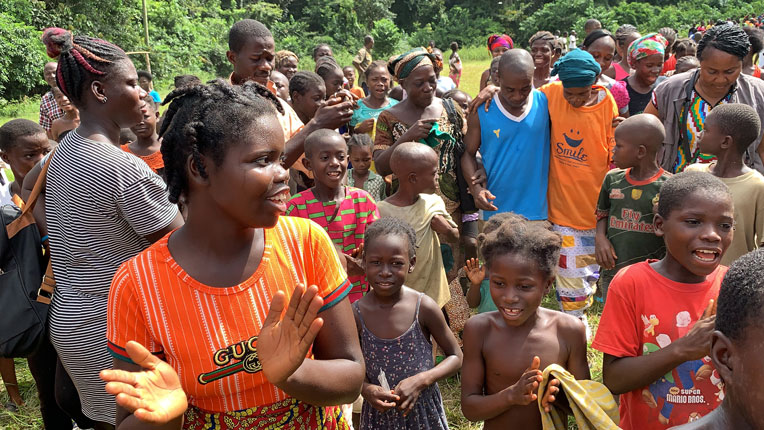 As Secoh returns to her village, the people in her community celebrate her transformation. Her name is no longer Secoh, which means “cursed.” Her name is now Grace.