YOU HAVE (0) ITEM(S) IN YOUR CART. CHECKOUT NOW
50 Years of Ministry

Somalia descended into the chaos of civil war after the socialist regime of President Siad Barre collapsed in 1991. Fighting factions ravaged the country and rain was scarce, sinking them into their worst famine of the century. An estimated 300,000 people died.

“Driving through south Mogadishu is what I would imagine driving through the streets of hell might be like,” said Franklin Graham of the wickedness and destruction he witnessed. Anarchy reigned: there was no government, police, or postal system.

Since local medical staff had been murdered or driven out by the war, fewer than a dozen foreign physicians were seeing to the health concerns of Somalia’s 8 million people. To help meet this critical need in Jesus’ Name, Samaritan’s Purse launched a mobile medical clinic to treat malnutrition, malaria, anaemia, pneumonia, dysentery, measles, and other diseases that were claiming the lives of thousands.

People were dying every day from starvation.

“People were dying every day from starvation,” said one of the doctors who served with the mobile clinic.

Over the course of 13 months, more than 100 volunteer Christian doctors and nurses from the U.S., Canada, and Europe served for varying lengths of time. They treated up to 800 people a day, seeing a total of 44,500 patients. 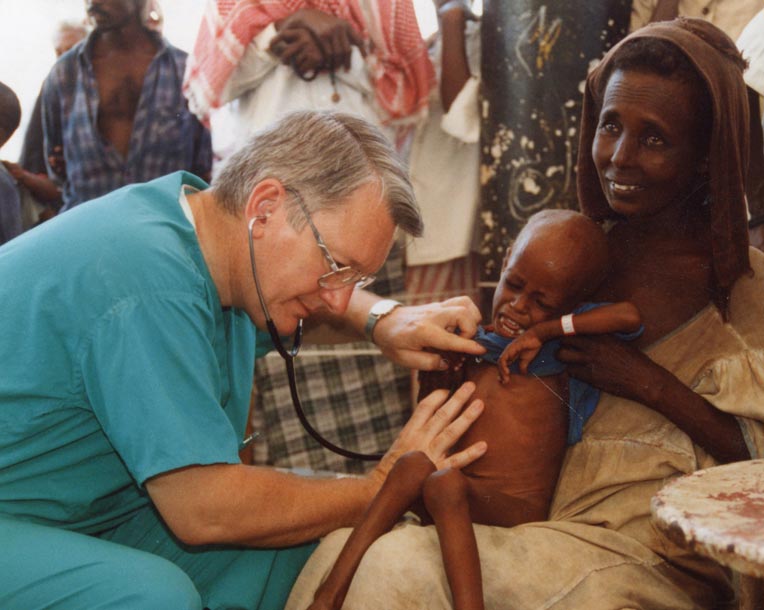 “As we set up our clinic, I noticed how much this poor neighbourhood had suffered,” wrote one of the physicians in his journal on April 9, 1993. “We put our doctors’ examining room on one side of the road with the ‘pharmacy’ and dressing area in another home across the road. This road, I was to learn, was part of the infamous ‘Green Line’ [that divided Mogadishu between warring groups]. Our clinic moved along with over 300 patients seen that day. There were a remarkable number of children with whooping cough, a few with relatively recent cases of polio, and several gunshot wounds.”

Jim Harrelson, vice president of Operation Christmas Child, who first served with Samaritan’s Purse as the Somalia project director, said, “It was a very difficult place, very sensitive place, very dangerous place.” As proof of this point, the deadly October 1993 attack on U.S. troops chronicled in the book and subsequent movie, Black Hawk Down, took place during our ministry there.

Yet, Jim said, “We felt the Lord’s protection and peace the whole time. We were called to give the cup of cold water, to proclaim and preach the Gospel through deed and action, but also when the opportunity arose to speak the truth to individuals, we certainly took that opportunity.”

With Jim’s wife Grace, a nurse, serving as the mobile clinic’s medical director, Samaritan’s Purse counted it a privilege to spread God’s love in the beleaguered African nation.

The work started through this project continues in some form even today. At least one of the doctors who served with Samaritan’s Purse in Somalia in 1993 still addresses the medical needs of this highly sensitive region on an ongoing basis.

Good News and Great Joy for Children Around the World

Faith on the Front Lines of Coronavirus