Help Comes from Far and Near After Fires in Australia

Samaritan’s Purse volunteers from across the globe have joined together in Jesus’ Name to help Australian families recover after the bushfires.

Terry and Patricia watched in horror as the raging Australian bushfires destroyed their home. 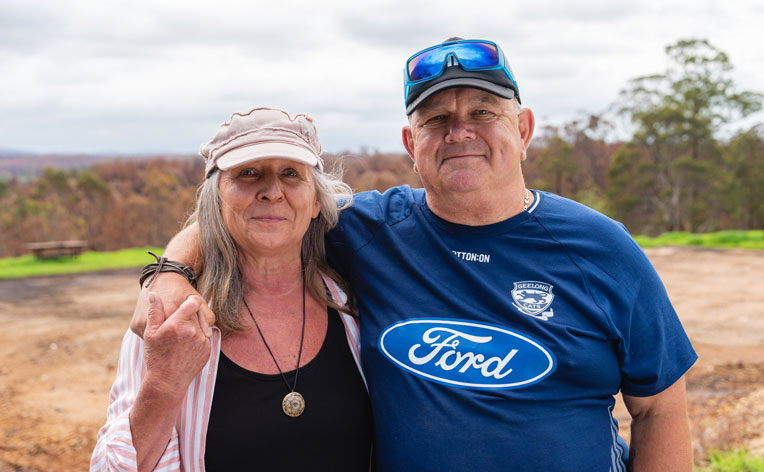 Terry Maki and his partner Patricia experienced God’s love through the many volunteers who helped them sift through the ashes of their home.

“It was like watching the lights on a Christmas tree all night—the flames must have been so high above the trees,” Terry said. They watched from 12 miles away—the blaze was that intense. “It was just unbelievable; horrified, just horrified.”

Record-breaking high temperatures, strong winds, and years of drought led to devastating bushfires that blazed across Australia for months—burning more than 25 million hectares of land and destroying thousands of homes.

Terry and Patricia originally believed they would return to their Victoria home and find years of priceless personal memories unscathed. “We just thought we’re going to come back later in the day and that was about it.”

Smoldering trees lined the roadway as the couple made their journey back home—holding on to a faint hope that their house had survived the widespread flames. Yet, when they no longer saw the once prominent roofline, Terry and Patricia broke into tears.

“We drove up the driveway sort of looking for the peak of the building coming up the hill, and we just both broke up because we couldn’t see the house anymore,” Terry said. “You know you just look up the hill just hoping, hoping, but it wasn’t there.”

They soon had to put aside their grief and begin determining what was salvageable from the ashes. Fortunately, Samaritan’s Purse volunteers from across Australia, Canada, and the United States were there to help in this time of crisis. Men and women worked carefully to help Terry recover personal belongings from the ruins of his home. 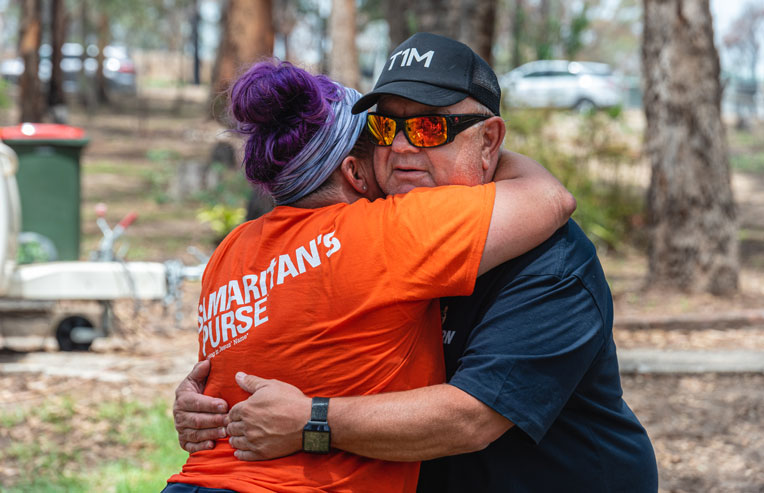 Terry Maki thanks Samaritan’s Purse volunteer Amy Jarrett for helping recover personal belongings from the ashes of his home.

Since the initial outbreak in Queensland in Autumn 2019, Samaritan’s Purse disaster relief teams have been offering support to Australians devastated by these terrible fires. So far, we’ve helped more than 160 hurting families in 48 communities across three states recover.

“I was just totally amazed that people would come from so far away,” Terry said. “Doesn’t matter how far they come as long as they came and helped us, which is nice—forever in our hearts.”

Retrieved from the ashes was a set of rare Australian coins no longer in circulation. Terry had originally purchased these to represent his three daughters. Additionally, volunteers found a diamond ring that belonged to Terry’s mother—one of the few items he had left to remember her by. “I wasn’t expecting that—it’s just the sentimental value, so, I’m happy.”

Even more, Terry developed strong friendships with the Samaritan’s Purse volunteers who worked on his home.

“It was good for our soul,” Terry said. “We had a bit of support from the crew and you sort of don’t realize how a group of people whom you’ve never met before can be so helpful and not ask anything of you.”

While days of long-awaited rain extinguished the months of bushfires in Australia, the road to recovery for thousands of families continues to stretch on. Please join us in continuing to pray for these affected families and for our teams as we help them in Jesus’ Name.

“So also good works are conspicuous, and even those that are not cannot remain hidden.”—1 Timothy 5:25
Samaritan’s Purse volunteers recovered a diamond ring belonging to Terry’s mother from the ashes of his home. 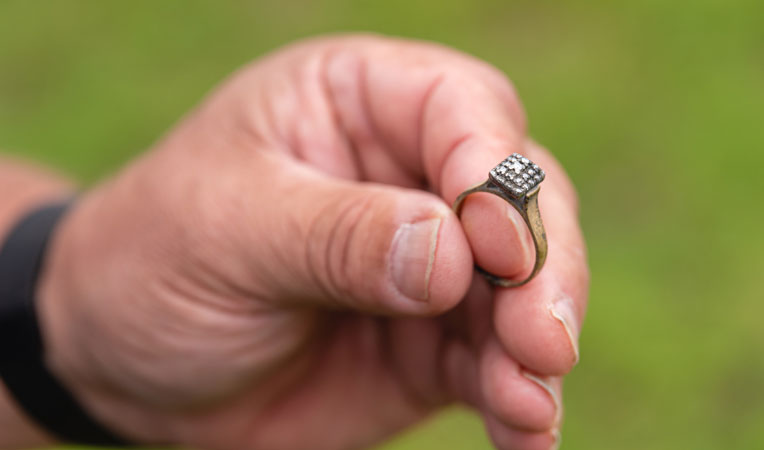 Samaritan’s Purse volunteers recovered a diamond ring belonging to Terry’s mother from the ashes of his home.