A CHURCH WAS STARTED AMONG AN UNREACHED PEOPLE GROUP THROUGH THE MINISTRY OF A LOCAL PASTOR IN PARTNERSHIP WITH OPERATION CHRISTMAS CHILD.

La Laguna village in remote Mexico, home to the Nahuatl people, was once unreached with the Gospel of Jesus Christ. No one in the mountain community had ever heard the name of Jesus. No one had ever been told that God loves them or how they could have a personal relationship with the Living Saviour. No one had a Bible.

Now, because of one pastor’s obedience to share the Gospel and his vision for reaching children through Operation Christmas Child, the Good News has come to La Laguna and the community will never be the same.

On 22nd of October, children, parents, school teachers, and friends from the area gathered for a special worship service to dedicate the first ever church building in La Laguna. The church was birthed after children came to faith in Christ during an Operation Christmas Child outreach event and in the weeks following during The Greatest Journey, our follow-up discipleship programme for shoebox recipients. 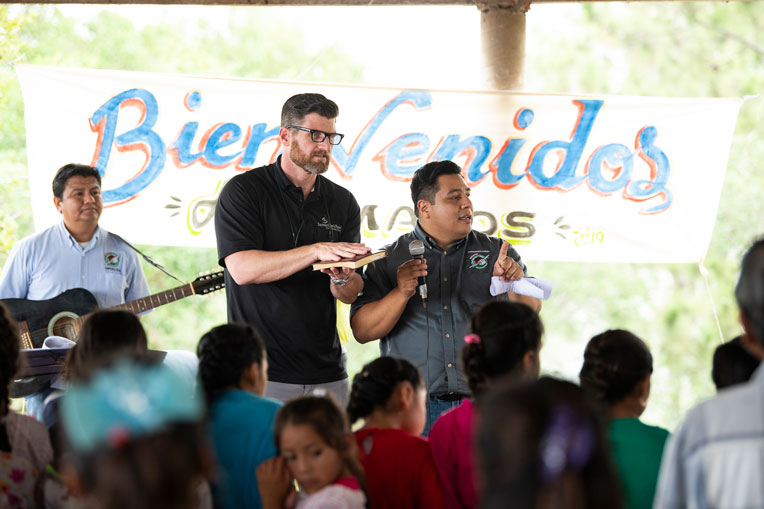 EDWARD GRAHAM ENCOURAGES CHILDREN AND ADULTS DURING A CHURCH DEDICATION.

The children shared with their parents what they learned about God and the Bible through the discipleship lessons, and as a result, many adults in La Laguna are now also Christians.

“Operation Christmas Child shoebox gifts are Gospel opportunities. What an incredible story of how God has used something simple to reach the children, to share the Name of Jesus, and to teach them about discipleship,” said Edward Graham, who participated in the church dedication service.

Speaking from Matthew 7:24-27, Graham encouraged the congregation to remain faithful to God’s Word. 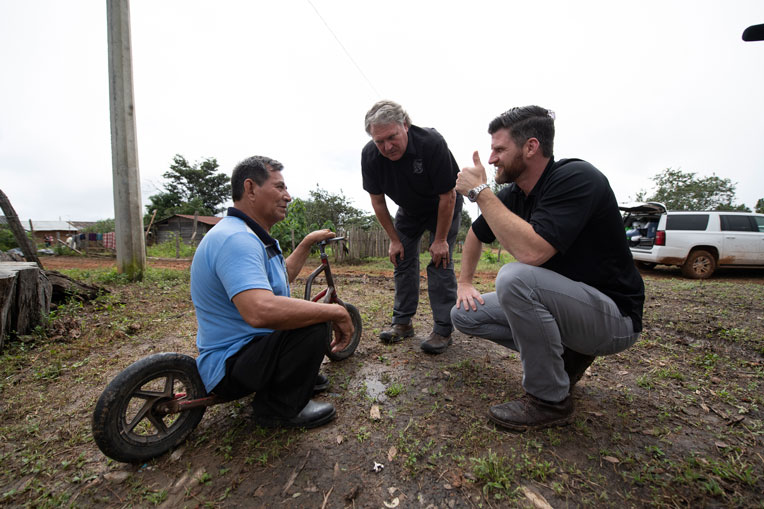 The service included songs of worship, Bible reading, and a special prayer for the children in La Laguna.

“This church will be a beacon of light and living hope in Christ alone to all these surrounding villages. Here we are, in one of the remotest parts of the world, and a church is being dedicated. It’s overwhelming,” he said. “In all tongues, tribes, and nations, the Lord is preparing His people to take the Gospel forward. We are in the middle of the Lord’s faithfulness.”

Operation Christmas Child and The Greatest Journey marked the turning point in Pastor Jose Benitez’s ministry among the indigenous people in La Laguna. He was already pastoring a church in a town several hours away when, through his radio broadcast, a listener from La Laguna named Eusebia wrote a letter explaining that she wanted to know more about God.

Pastor Jose travelled to the village to meet with Eusebia and he rejoiced when she became a follower of Christ. For the next 20 years, Pastor Jose made the arduous trek up the mountain, along a dangerous road that’s often flooded, to preach and teach as often as possible. [Learn more about Eusebia’s story in this article from last year.]

But the spiritual fruit did not come. People were not coming to faith as Eusebia had done. They were not interested in the things of God.

Yet, Pastor Jose didn’t give up. He continued praying and sharing the Good News.And when dozens of children came to faith through Operation Christmas Child, Pastor Jose didn’t stop there. He taught The Greatest Journey under a mango tree and began praying even then for a house of worship in La Laguna.

“I see a place where we’re going to be able to train young boys and girls to grow in the Lord and to go to other communities to share the Gospel. The goal is to keep going to unreached communities,” Pastor Jose said. 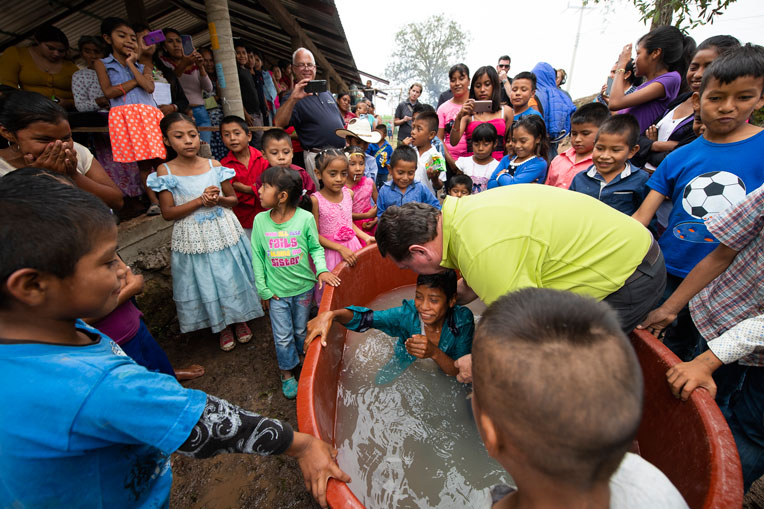 JONATHAN WAS ONE OF SEVERAL CHILDREN WHO GRADUATED FROM THE GREATEST JOURNEY CLASSES AND THEN GOT BAPTIZED DURING THE CHURCH DEDICATION SERVICE.

Pastor Jose has had Polio since age 2 and uses a scooter to get around since he can’t walk. He wears a glove on the one hand that he uses to push the scooter.

“This has not been an impediment in any way to take the Gospel to those who need it. God has given us the strength to take His Word,” he said. “It’s God who brought me to this place.”

“In the eyes of the world, maybe he has an excuse to say ‘I can’t do that.’ But he hasn’t let that hold him back,” Graham said. “It’s not his feet moving, it’s Jesus taking him. He’s being obedient to the Gospel.” 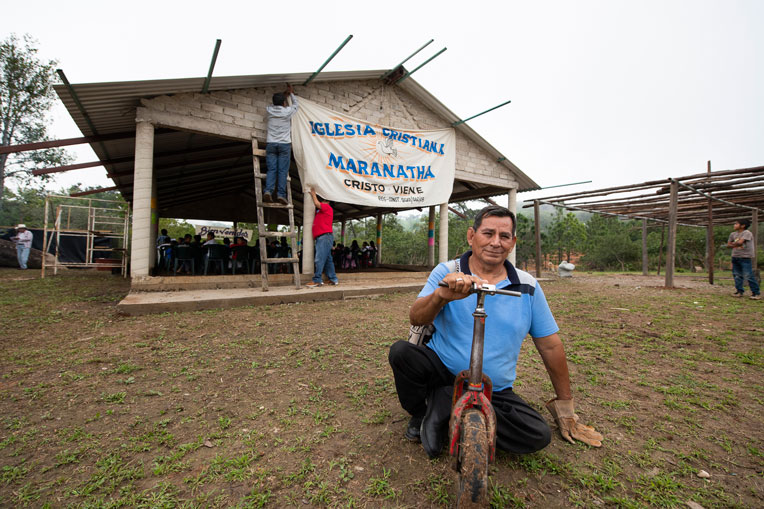 PASTOR JOSE USES A SCOOTER TO TRAVEL TO THE CHURCH WHERE HE IS SEEING DOZENS OF CHILDREN LEARN ABOUT GOD’S LOVE FOR THEM.

The dedication service also included a time of baptism for several children, all who are graduates of The Greatest Journey. Jonathan, Eusebia’s grandson, said he wanted to be baptized because he wanted to “follow the way of the Lord.”

Jonathan still remembers the day he received his shoebox gift—his favourite gifts were the markers and coloured pencils.

Jonathan’s mother was among the first Christians in the village and she said people often criticized her for believing in Jesus. “I am very happy now seeing more people coming to Christ,” she said.

Alexandra, whose daughter Lidia was also baptized, said her family knew nothing about God before they met Pastor Jose. Even though Lidia had to walk 30 minutes from their home in order to attend The Greatest Journey, she did so willingly and continues to cross the mountain when Pastor Jose comes to teach. 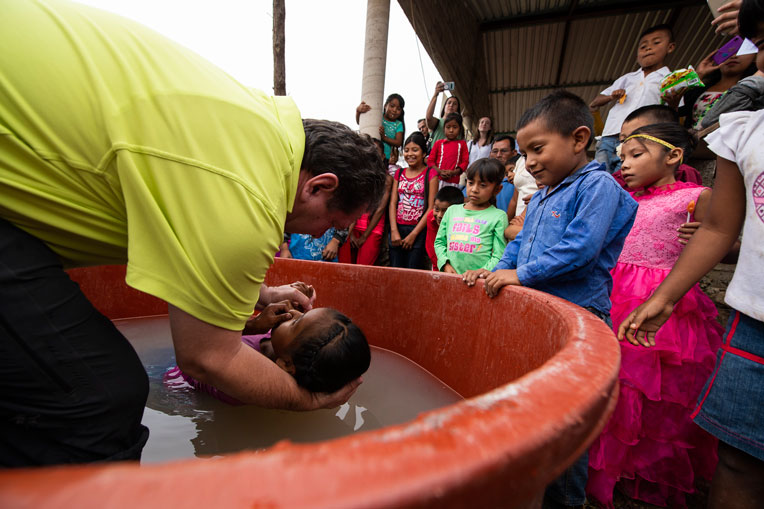 CHILDREN GATHER AS ONE OF THEIR FRIENDS IS BAPTIZED BY A PASTOR OF THE NEWLY DEDICATED CHURCH.

“Ever since he has come, the way the kids here behave is totally different. They want to go forward and follow the Lord,” Alexandra said.

Alexandra has eight children and four were of the appropriate age to receive Operation Christmas Child shoebox gifts.

“It was the most special thing they had ever gotten. I can’t give my kids things like that,” she said. “We’re very grateful to people in other places who pack the gift boxes and send them to us.”

Please pray for the children in La Laguna, that they will grow in the knowledge of God and share their faith with others. Pray that this new church building will be a place where many more people will hear and respond in faith to the Word of God. 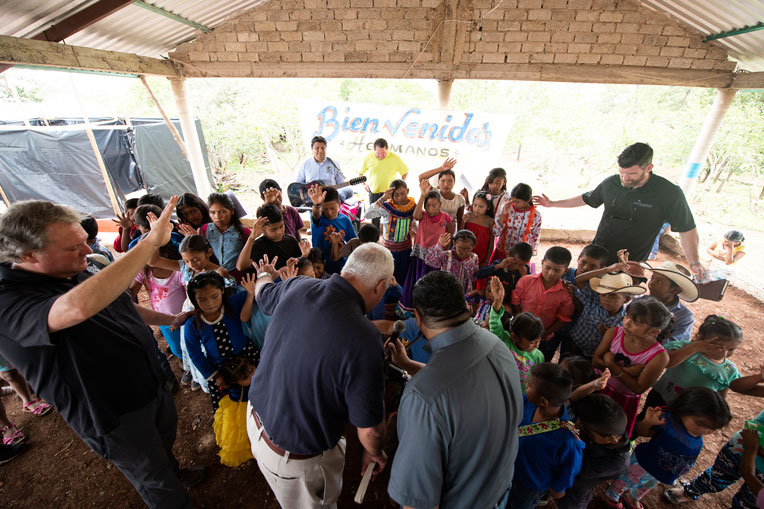 CHILDREN, CHURCH LEADERS, EDWARD GRAHAM, AND OTHERS GATHER TOGETHER AS JIM HARRELSON (CENTER IN BLUE SHIRT) LEADS IN PRAYER DURING THE CHURCH DEDICATION.

You can bless children around the world by prayerfully packing shoeboxes full of toys, school supplies, and hygiene items.

Learn how to pack a shoebox today!

Shoebox Gifts Go Even Where There Is No Road

A Mountain Community in Mexico Responds to the Gospel