Samaritan’s Purse today sent our DC-8 aircraft packed with winter relief supplies to Yerevan, Armenia. We will be delivering critically needed warm clothing to families who have fled the conflict between Armenia and Azerbaijan over the long-disputed region of Nagorno-Karabakh.

Since fighting broke out on 27 September, thousands of people have had to flee their homes in the Caucasus mountains. Our team is bringing enough winter clothes and blankets for 500 families in need. The boots, coats, gloves, socks, and thermal underwear included in the shipment will be especially welcome now that temperatures are consistently dipping towards around zero degrees. 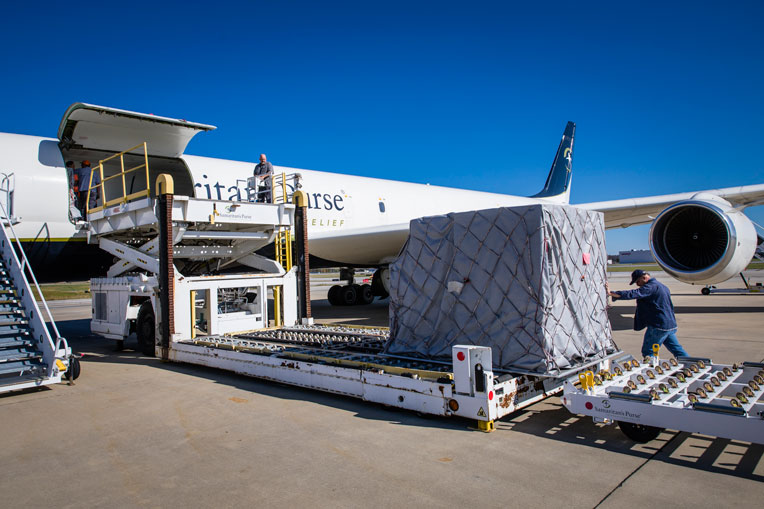 The winter coats, boots, gloves, and socks loaded onto the shipment will provide much-needed relief for the winter temperatures.

“The conflict between Armenia and Azerbaijan is heart-breaking. Families are caught in the crossfire of a brutal war, and thousands have been forced to flee,” said Franklin Graham, CEO of Samaritan’s Purse. “Samaritan’s Purse is bringing critical relief to people in need—reminding hurting families that they are not alone and that God loves them. Please pray for God’s protection as families seek to escape the conflict, and for our teams as they help in Jesus’ Name.”

Among those fleeing the fighting, around 80,000 people have travelled some 200 miles to Armenia’s capital of Yerevan. Many of these individuals are staying with friends or relatives in the city, and meeting basic needs is difficult. Samaritan’s Purse is already working together with a partner to also distribute boxes of food to these desperate families.

“Please pray for God’s protection as families seek to escape the conflict, and for our teams as they help in Jesus’ Name.”

In addition to providing aid in Armenia, Samaritan’s Purse is also in discussions with Azerbaijan about providing emergency relief there as well.

Nagorno-Karabakh, populated primarily by Armenians, has been a nettlesome issue for Azerbaijan and Armenia for many years. When the Soviet Union began to fall apart in the late 1980s, fighting between the two newly independent nations erupted in the region and lasted until Russia brokered a ceasefire in 1994. However, clashes have continued over the past three decades, most notably in 2016 and now this fall.

Please pray for the people of Nagorno-Karabakh who are caught in the bloody crossfire of the conflict as well as for Samaritan’s Purse staff as they provide help in Jesus’ Name.

Our DC-8 aircraft was loaded with winter relief supplies for families in need in Yerevan, Armenia.